A short history of the kick sled 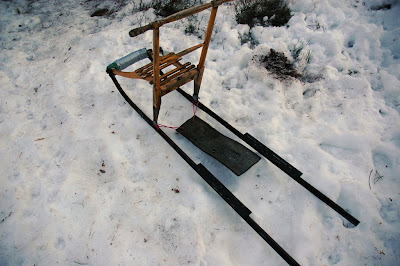 Kick sleds are, in a sense, the Scandinavian answer to winter bicycling. Kick sleds look like Zimmer frames on runners, or like a dog-less dog sled. Like bicycles, they increase the rider's speed and freighting capacity while demanding very little extra physical input. Unlike bicycles they have no moving parts and are very easy to maintain.
The operator stands behind the rear stanchions and propels herself forward by kicking between the runners. On the classic models there is always a seat to carry goods or a passenger. Kick sleds can be quite fast in flat areas, and ridiculously fast downhill. Even uphill they provide benefits as pushing a loaded kick sled is easier, and safer, than packing stuff in a backpack up a slippery road.

Though kick sled-like contraptions have been around at least since the seventeenth century in Holland (above), they only became recognizable, standardized and mass produced in Sweden in the late nineteenth century. Popularity took off in the 1920s and 30s, but they have become much less prevalent since the 1970s.
Kick sleds do demand some very specific circumstances. Not only cold weather, but also cars, or at least horse sleds, to compact the snow on roads. The runners are typically ice skate-like blades, useful mostly on very hard surfaces.
When I was a kid in the 1970s you could still see a whole row of kick sleds in front of shops or schools. The ones who use kick sleds now are mostly those champions of common sense, the same elderly women who drink tap water, eat fish and vegetables, read books, knit and live to one hundred.
I have not read any scientific studies on the kick sled, but the reason for it's demise are easy to guess at. The distance to shops and schools have increased the last decades. Car ownership has increased, not only luring would-be kick sledders away but creating worse conditions for the remaining faithful. Salt, chemicals and snow plows have also made kick sleds less useful, though some municipalities in Finland, Sweden and Norway try to reserve a part of the road for kick sleds.
In other words, kick sledding culture can only really thrive in circumstances where there are some cars, but not where there are too many. Admittedly, roads were primed for horse sledding by teams with either heavily loaded flat-bottomed sleds or enormous rolling pins. But mostly this era preceded the industrial production of kick sleds.
There's also the psychological aspect to the disappearance of kick sleds. As a technology becomes less common, the remaining users feel more and more self conscious. Who wants to be the only one to arrive at school on a kick sled? Who wants to be known as the kick sled lady?
Kick sleds are in a sense the Yiddish of transport alternatives: No war has ever been waged on them. They were predominantly used by women and children, and what existed of kick sledding competitions were always robustly humorous and tongue-in-cheek.
Kick sleds are still sold in sporting goods stores all over Scandinavia. The modern versions are always collapsible, which is good for transport and storage, but comes at the expense of rigidity. They are purchased, I imagine, mostly for their combination of nostalgia and novelty. I doubt they see more than a couple of miles of use in their lifetime.
There is a kick sled renaissance of sorts, orchestrated by the Finnish company Kickbike.
I have two kick sleds in my stable, an old classic (above) and a modern, Finnish one (below). I have wide, plastic runners that I can fasten to them so I can use them even when there is snow on the roads, and not only ice. The classic one has been modified for moderate dog-sledding use, with a drag brake between the runners and some padding up front, just in case the dogs get run over by the kick sled. (It's never happened.) The "Finn" is kept clean and streamlined. 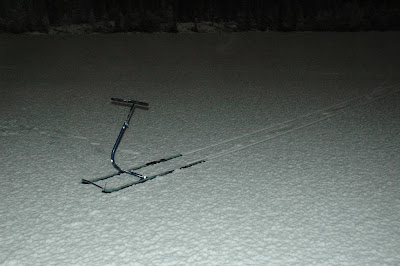 More:
Another history of the kick sled (in Norwegian).
Incredibly interesting pictures of my kick sleds and mods.
Posted by Northmark at 11:07 AM

Not a good post. It's a great post. Almost makes me want to move north (not). Seriously, I really like this kind of stuff. Simple things that work that I had never heard of.

Thanks. I was rather worried about this one. "Christ," I thought, "here I go again, too many cars blah blah blah, simple stuff works best blah blah."

Very fine blog, this is. I live in Vardo, "arctic" Norway, and here the snow is windhammered to the ground (and walls,etc). Perfect kicksled conditions from dec-april. And there are lots of them around. Very much like bicycles are in the summer.. I enjoy your articles.
best wishes. T

When I was a kid, we always used kick sleds to school. But 40 years ago there were winters in south of Norway.
Now I live on the west coast (Stavanger), with a milder climate, and there are hardly any kick sleds around. But back then it was a really great way to get to school :) We used to race with them, we could have passangers on the seat and our school bag if it was heavy. And it was really fast downhill!
I have lots of good memories from using kick sled!
Helen, Stavanger, Norway

I need a brake for my kicksled (I live in Alaska). I cant seem to find a place to buy JUST the brake, so I was thinking of trying to make one. Could you post some closer up pictures of your brake for me? I would really appreciate it. And tell me the material that is used. I have seen metal ones but yours looked a bit different.

I need a brake from my kicksled. Would you consider posting some closer up pictures of your brake? Would like to make one myself if I can. THANKS.

Super helpful of you to post those pics. I know what I am going to be working on over the xmas holiday! I am a kicksled newbie but am enjoying it alot. I have a pup that needs to be slowed down a bit (GUESS THAT MAKES ME A "CRAZY"ONE :-) thanks again. appreciate you taking the effort to post those! Have a nice xmas.

Ahhh, nostalgia! I used to kick-sled through the town where my grandparents live when I was a kid. Going down hills was so much fun! Unfortunately, they SAND the pavements in cities, so I can't use them in my day-to-day life (I live in Northern Finland).

Still, I HAVE to get that new-model kick-sled from Kickbike, it is seriusly cool!

Interesting topic.
used a kicksled as a kid to go to school in Finland. That was late sixties.
It was fun to ride the kicksled on downhills.
Late Esla in Finland put wheels under kicksled and it developed to this http://kickcycles.com/images/kick_shopping.jpg
Quite practical kick scooter but for some reason the ide has not spread yet around the world?
Now I have developed a 3 wheeled version of my own based on the 4 wheeler I had before.
This 3 wheeler has got potential but I am not going to patent it as I have not got enough financial resources to market it. Instead I am making it open source hardware design. I just made it two months ago so I have not got a website.

Send pictures, or a link when you have one!
A marketing problem with the kick scooter is possibly its similarity to a zimmer frame. People are touchy about that. I see two-wheeled kickcycles now and then.
Kick sleds, I am afraid, are becoming rarer and rarer.

Not a hermit any more, strictly speaking.
I have lived in assorted woodland cabins almost my entire adult life, lately five years on my own land, five miles from the nearest road. No mains electricity, no running water. After a decade of mushing, I am now preparing myself for fatherhood and spending more time in The Towns. 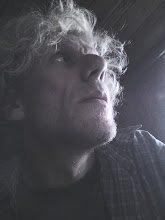